The 56th Edition of the National Aikido Demonstration 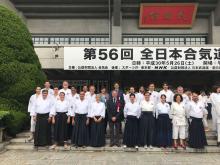 On May 26, the 56th edition of the National Aikido Demonstration was held at the NIPPON BUDOKAN, National Gymnasium of the Japanese Martial Arts, an event organized by the International Aikido Foundation in which approximately 10,000 people attended and actively participated in the demonstration about 8,000.

The Argentine delegation composed of  20 Athletes from different parts of the country participated in the event.

In his presentation, Doshu, Moriteru Ueshiba, head of the International Aikido Foundation, which centralizes all the Aikido organizations around the world, specially named his visit to Argentina. In that sense, he stressed that when he moved to Ushuaia, the southernmost city in the world, more than 50 people were waiting for him at the airport.