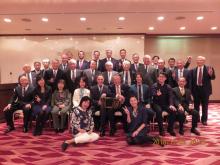 On December 5, the Nippon-Argentina Association (ANA) gave an end-of-year reception to the Argentine Embassy.

The event, which included a brief bandoneon concert, was attended by the Ambassador Alan Beraud, the President of ANA, Nobuhiro Endo, directors of the Association and the staff of the diplomatic representatives.

In his opening remarks, Ambassador Beraud and President Endo referred to the activities carried out jointly throughout the year and the special moment that the relationship goes through bilateral at its 120th Anniversary.